Okay, so, I lied, the majority of the game on Saturday was dull. I decided dead against writing a full on report about it, mainly because I have said it all before and I feel like I’m repeating myself.
We painted it white and played like shite. That’s kind of what happened in a nutshell. (If by any chance you do want to read the match report, you can view it here: http://www.leedsunited.com/news/20130316/united-beaten-at-home_2247585_3110062 )

I guess you can say the Play Offs are a lot more un-realistic now, we’d pretty much have to win every game and hope those above us, all made a habit of losing. Though I feel if we were to bring a new manager in….Maybe we could turn it round, maybe it could still be done but we’d have to look at doing it before Ipswich.
There is nothing more Neil Warnock can do with this team, its not working and things will never change while he is in charge but if by any chance we did manage to bring someone in, I think I would still cling to the hope that we could potentially make the play offs, stranger things have happened!!

Overnight odds on Nigel Adkins becoming the new manager plummeted and he became 4/11 favourite to replace Neil Warnock. As it stands right now, Adkins is 11/8.
Adkins is in high demand though, and we’d have to fight off competition from Reading and Leicester if we were to employ Southampton’s former gaffer.
Adkins is my preferred choice, but he isn’t everyone’s and I have been reading on Twitter, people would rather have Brian McDermott who was sacked from Reading not long ago. Leave a comment below and let us know who you would like to see manage Leeds United and why.

Both Ross McCormack and Steve Morison were sidelined due to injuries at the weekend, those injuries mean they can’t play for either of their international teams this weekend either. Hopefully the break does them good.

Good luck to Tom Lees, Aiden White, Paul Green and Rodolph Austin who are all away on international duty this week too.

The one word that sums up Tuesday night's game against Peterborough and pretty much the whole of the season to date.

The squad remained unchanged for the 6th match in a row for the first time in 20 years.

Peterborough were really throwing everything but the kitchen sink at us in the first half, especially in the first 30 minutes of the game. We were very much on the back foot and were failing to deal with the attacking threat they were posing.
No sooner had I heard someone behind me say "A goal is coming for them isn't it?" did we concede one of the easiest goal this season. Dwight Gayle was first to react to a brilliant long ball from their keeper, Olejnik and Lee Peltier failed to stop the determined striker from shooting inside the area past Paddy Kenny to make it 0 - 1.
I thought this might wake us up slightly as we'd hardly been in the game, but The Posh were looking to double their lead and hit the crossbar not long after.
Tom Lee's was substituted due to injury after the goal and replaced by Jason Pearce.
We were lucky to only be one goal down at half time and to say we needed to see an improvement would have been an understatement. This wasn't the Leeds United I'd seen in the past few weeks, we looked to had taken a bit of a backwards step.

Warnock decided to make a change at the break, bringing El-Hadji Diouf on in place of Steve Morrison who, according to Warnock, had been playing through the pain barrier at Leicester and Crystal Palace. In fairness, he'd not really been in the game anyway so the decision to take him off was a good one, I felt, even though he had scored a brace in the second half against Palace.

There was more life in the home side in the second half though and a fantastic delivery from a corner taken by Stephen Warnock let Sam Byram equalise after he was given space at the back post to score on the 56th minute. This gave a somewhat fuller Elland Road than we've seen this season a lift and we really got behind the lads.

Both sides were hungry now and both trying to look for the winning goal & we thought we'd taken the lead with just under quarter of an hour remaining when Luke Varney had the ball in the back of the net but the linesman's flag was up and the goal didn't stand.

We were putting a lot more pressure on and we had so many more chances to win the game but we were failing to put them away.

The game ended and the points were shared, which was probably a fair result however both sides were presumably left wondering how there weren't more goals in the game.

We had twenty shots on goal, nine of which were on target, Peterborough weren't far behind with sixteen shots in total, they also had nine on target.
It sounds obvious but we really need to start putting these chances away.

Again, five points off of 6th place, we are left wondering....Could we?! Things would have looked a lot rosier had we'd have won, but when have Leeds United ever done anything the easy way?! 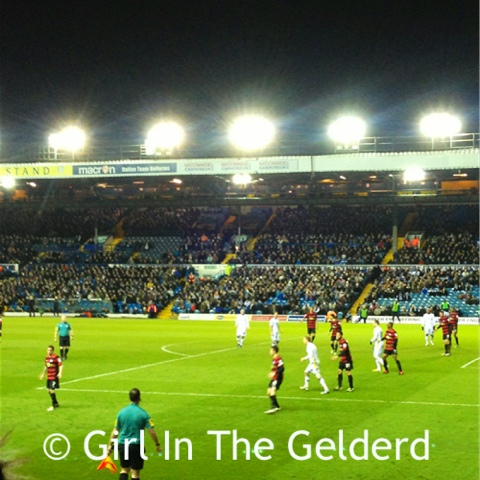 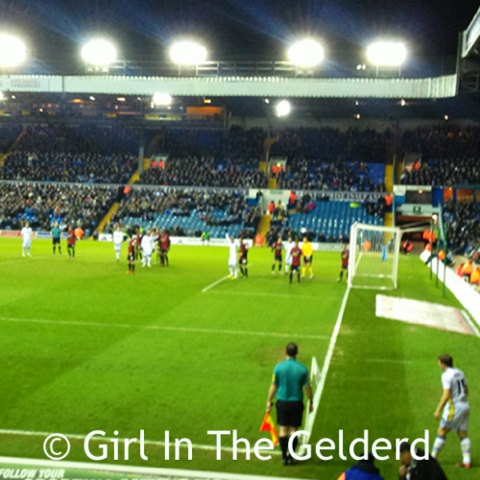 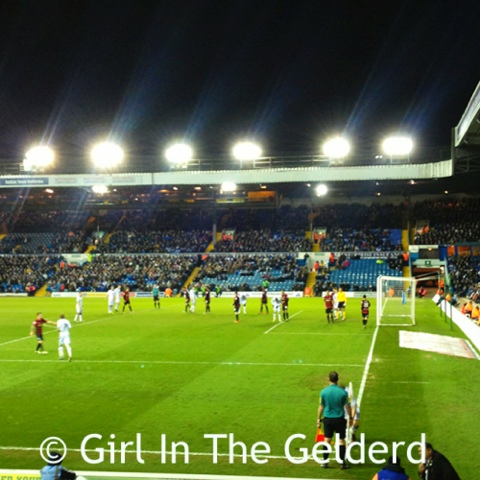 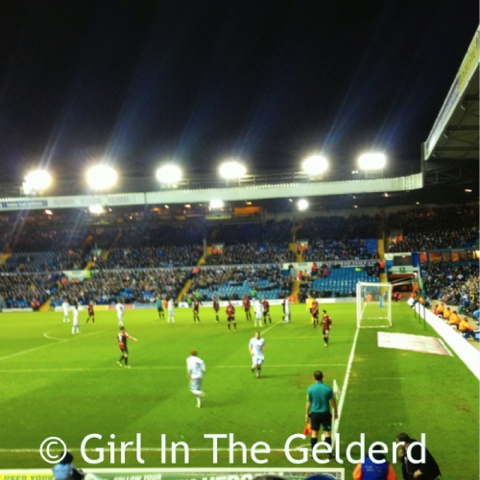 Posted by Girl In The Gelderd at Thursday, March 14, 2013 No comments:

It's clear to see that performances have improved over the past couple of weeks and we have come on leaps and bounds, though annoyingly we have dropped points with the goals we've conceded late on. The question remains though, can we still make the Play Off's this season?

At the moment there is a constant battle between my head and my heart, my head says, write this season off, build on it and we'll go again next season. My heart, however says, we're not out of this yet, give it one more game and then decide, The problem is, I've been giving it one more game for weeks!! We've had some fantastic opportunities to get closer to the Play Off's as other teams around us have lost but this league is so unpredictable right now and the table is so tight!! I think we could yet see some late twists and turns in the latter stages of this season.

Tonight we are facing Peterborough United who are currently second from bottom and struggling for survival, however should they win tonight, they will climb out of the relegation places.
It's always a tricky time to play a team fighting to stay up but on the other hand, we still have something to play for too, does this have the makings of a great match? Hopefully!

The win at the weekend painted a much more positive picture as we set off to Leicester on Tuesday evening, though we were all still quietly cautious about whether we could still make the Play Off's or not.

An unchanged side was named once again to face Leicester, who, before the game, sat in 5th position in the League Table.

In the opening stages of the game, we seemed to be on the back foot, Leicester looked the team most likley to score and were having the better chances.

On the 16th minute a mistake by Paul Green gave Chris Wood an opportunity to score, saved only by Paddy Kenny who reacted well.

Leicester responded a minute later, Harry Kane shot on target, Paddy Kenny was there again to make the save.

Paddy Kenny had already made some very good saves, but on the 35th minute Chris Wood struck a fierce shot that was dipping beneath Paddy Kenny’s crossbar before he managed to produce a wonderful stop to tip the ball over the bar.

In the last few seconds of the first half Knockaert took a free kick and it was Kenny to the rescue again as he pulled of another great save.

Paddy had very much kept us in the game thus far. Though Leicester did look the side most likely to score, when we broke down their midfield, we looked a threat and the game hadn't been without its chances for us.

Leicester had the opening chance of the second half when David Nugent's shot cleared the crossbar but it was the travelling fans who were celebrating on the 52nd minute after Sam Byram was in a great position to put away a delivery from a corner taken by Ross McCormack.

We switched it on and began to pressure Leicester, whose defence looked to be struggling. The goal was like a breath of fresh air and a newly confident Leeds United side looked hungry for a second goal, which almost came when Ross McCormack took a shot at goal on the 57th minute. The effort was saved though, by Schmeichel.

Leicester were by no means giving up though and were hitting us at any possible opportunity. Our defence was working hard to keep them out.

Agonisingly though, on the 93rd minute, after a flurry of chances and corners, Leicester City managed to equalise. A pretty much, free header from close range by Michael Keane saw the sides draw level.
Elation from the home fans and frustration from the travelling Leeds United faithful.

Though happy with our performance, I left the ground dejected somewhat, but I felt that goal was coming, there were just too many corners to defend!!

Though it might sound like it was all Leicester, I can assure you, this was the best I'd seen us play in quite some time. The only player I was disappointed with, was Morison.
Other than his goal the other week, I've not been impressed by the striker at all. He doesn't get up well enough for headers and hasn't impressed me in the area either.

Frustratingly what it all comes down to in the end, is, we have to start putting our chances away. We MUST go for that second goal. I can recall a moment in the match where instead of trying to cross the ball into the area, we chose to keep it in the corner, this is Okay on the 89th minute but this was no more than 70 minutes played. We can't do this, we have to go for that second goal. Defending a one goal lead is always risky no matter how good your defence is.

I gave my man of the match to Paddy Kenny. Though others deserved it just as much, he had a fantastic game and saved some absolute beauties. It was a shame we just couldn't keep a clean sheet.

Crystal Palace next up for The Whites, away at Selhurst Park & I won't be there!!!! First league match I've missed all season, absolutely gutted. Safe journey everyone, cheer on the boys for me!! 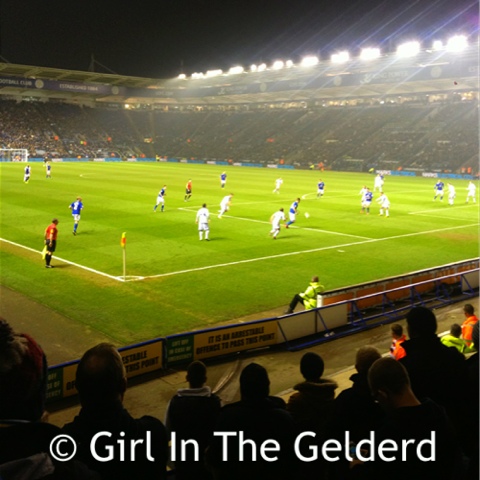 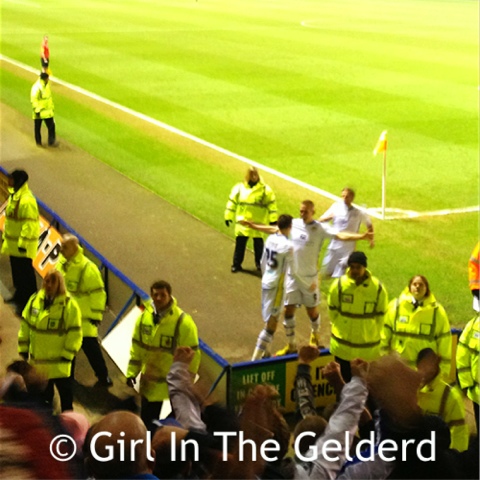 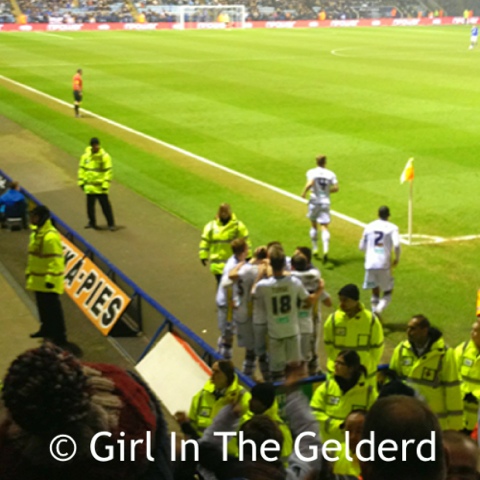 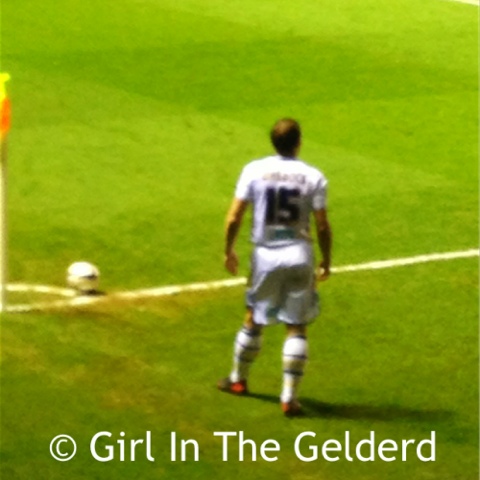 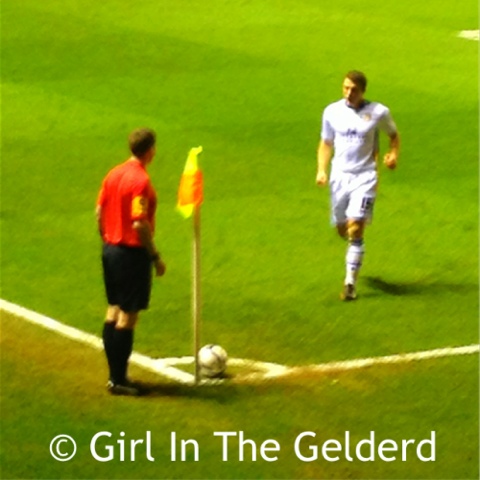 Posted by Girl In The Gelderd at Thursday, March 07, 2013 No comments: